What would happen if you were suddenly deprived of every screen, every Wi-Fi connection and every digital device in your life? What would your day be like if you weren’t checking Facebook, scrolling through Instagram or sending a volume of texts?

For some, the transition to a life without pixels could sound like a healthy release from technology that has gradually become ubiquitous throughout societies worldwide. But for many, the mere thought will make them uneasy, bristling with frustration and anger. Without their phone, how will they tweet? Without their laptop, how will they continue their next Netflix binge?

Clinically, an addiction indicates behavior that provides a source for satisfaction that can’t be rationalized as existing elsewhere. They look to escape an undesirable situation using tools that often result in unhealthy behavior.

Obsession has its roots in fear. With the range of means by which technology provides interconnectedness, especially with the rate of “information turnover,” it’s easy to see how this can apply. What if you were suddenly unable to play a role in your social groups’ digital existence? What if you suddenly couldn’t like Facebook posts, play games or communicate with friends? Our social value has transitioned to dependence on digital methods, and some primal fear of falling behind and losing social status can certainly drive our need to maintain a constant connection in binary terms.

These concepts aren’t just theories. Major studies of the brain have measured upticks in chemicals released due to anxiety when separated from technology.

This immediate gratification and reliable means of distraction are now being linked to mental health issues. The threat of “avoidance coping” has become intertwined with technology as a near-infinite number of resources are available to distract us from facing issues such as stress. Why deal with the unpleasantness of facing sadness, anger or loss when it can be thoroughly overpowered by prolonged engagement with online distractions?

Studies also show heavy consumption of digital media is leading to other problems as well. Constant social media consumption has been linked to depression. Sleep deprivation and its long string of related effects on health is becoming more widespread. An increase in substance abuse is also being documented as driven by this world of digital interaction.

Fighting Digital Worlds With Analog Ones

The term “analog” has become anachronistic, indicative of a time before microprocessors provided escapes, but it has immeasurable value when dealing with digital obsession. The analog world is still our standard, a physical one that lives outside of technology. And it’s in this world that you can begin to find respite from the dangers of digital obsessions.

Where can you start? Your first step is to recognize whether the world of online interaction has become so pervasive that it’s an issue. From here, you can make a plan to fight back. Make plans to set aside technology, such as turning computers off, setting a phone aside and avoiding a flat screen television.

Engage in physical activity without tech involved — visit a park for a walk, visit a gym or pick up a book. Start cooking more often. Try out a yoga class. Give your brain an opportunity to enjoy moments that don’t require electronics to provide satisfaction.

If you find it difficult to start any of these activities, or even rationalize integrating them into your routine, it could be a sign that you have developed an obsession with your tech outlets. By exploring any psychological rationales for depending on them, you can help get to the root of the problem and find a way toward a healthy lifestyle that approaches the digital world with balance.

What’s the first thing you do in the morning and the last thing you do before you go to bed? A generation ago, many of us may have answered: “Have a cigarette.”

Today we answer: “Check my phone.”

While the former is unarguably the product of addiction, the idea of the latter as an addiction is murkier. Is it possible to be addicted to our phones and the internet in general? The opinions of thought leaders on these questions may surprise you. 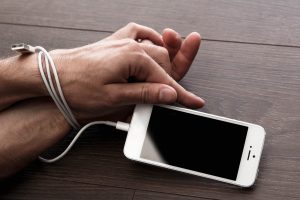 Is digital the new world of addiction?

The multifunctionality of smartphones makes it easy to reach for them as our resource of choice. From games and web surfing to GPS and a camera, there’s a solution on our phone — or a corresponding app — for just about anything. And because of its multiple uses, determining if phone use is the product of addiction or simply the phone’s own myriad capabilities can be difficult to discern.

In his article Cell-Phone Addiction: A Review, Jose De-Sola Gutierrez describes addiction as “an unstoppable and uncontrollable desire that can lead to use (a drug, a technology) despite its negative and detrimental effects.” While the immediate negative effects of cell phone use may not be as readily obvious as the cancer risks associated with cigarette use, they still cannot be ignored.

Your Phone, a Threat to Your Health

In this country, an average of six teenagers ages 16-19 die every single day because of distracted driving, according to the CDC, and while the rate among adults is noticeably lower, the risks posed by driving while on the phone have prompted government legislation in states across the nation.

In addition to potential hazards tied to cell phone use while driving, continual heavy cell phone use has been tied to problems associated with the user’s eyes and increased muscle pain.

Cell phone use has also been tied to numerous mental health disorders including sleep deprivation and depression, stress disorders, increased anxiety and the consumption of tobacco or alcohol in greater quantities. In addition, research shows heightened cell phone use can hinder a person’s — particularly a younger person’s — social experiences, as young users report spending less time with friends and less time going out on dates than they did in years past because of heightened cell phone use.

Recognizing and Treating the Threat

While more experts are widely accepting smartphone dependency as a legitimate addiction, would-be patients are understandably resistant to break away from their prized possession in a smartphone-dependent world.
The patterns of abuse appear most frequently in young women, particularly those who already show the need for excessive social networking or suffer from image and self-esteem problems. But smartphone addiction can strike people of any gender and age.

Because of the wide range of potential people suffering from cell phone addiction, treating the problem ranges from simple avoidance of the device for extended periods of time all the way to full-blown rehab. But as therapist and addiction expert Paul Hokemeyer, Ph.D., stated to Shape.com, as with any other addiction, the first step is acknowledging the problem. “If you think you have an issue, there’s a high probability that you do,” he said.