When considering what qualities best predict success in life, intelligence usually ranks at the top of the list. Being intelligent has always been an indicator that learning will come more naturally to a person, but in recent years, it's become clear intelligence isn't everything. Logical reasoning, spatial skills and mathematical aptitude are essential for academic success, but these and other properties of intelligence can only take a person so far.

While many people with high intelligence quotients (IQ) enjoy consistent wins in their personal and professional lives, some fail to achieve even the basics of success. This discrepancy suggests there is another major component in whether people end up healthy and happy. The concept of emotional intelligence fills in the missing parts in the equation by measuring individuals' emotional and social skills. In many cases, emotional intelligence can be a better predictor of success than IQ. Is it possible IQ is becoming obsolete?

What Is Emotional Intelligence?

In 1996, the psychologist Daniel Goleman published the book "Emotional Intelligence," built on the concepts Salovey and Mayer had defined several years earlier. The book catapulted EQ into the public consciousness and topped bestseller charts for months after its release. The subtitle of the book, "Why It Can Matter More Than IQ," caused an immediate sensation and made EQ a household concept.

What Does Emotional Intelligence Measure?

The framework Mayer and Salovey developed, which Goleman expanded upon, measures four branches of emotional intelligence based on the ability to:

This sub-group concerns how well you can identify emotions in yourself through physical indicators as well as your thoughts and feelings. It also measures how well you can spot emotions in other people, and how you perceive emotions in language, art and design. Being able to express feelings accurately is also essential in this area.

In people with high EQ, emotions help organize thoughts by pulling attention to the most important information. This sub-group judges how well your emotions can help modulate responses to stimuli and how well you can generate appropriate emotional reactions that keep thought moving.

Emotionally intelligent people are comfortable labeling and analyzing emotions of varying complexity, and can feel more than one emotion at a time. For instance, someone with adequate EQ can recognize that current anger at a romantic partner can coexist with love.

This sub-group concerns the ability to stay flexible and open to a wide range of feelings, and moderate negative emotions so they don't spiral out of control. It also measures a person's ability to monitor how clear and reasonable emotions are. Emotionally intelligent people can learn which emotions are useful and use them to guide personal growth.

Goleman's modifications to this structure simplify the definition of emotional intelligence. According to his model, EQ consists of self-awareness, self-regulation, internal motivation, empathy and social skills.

Despite its popularity, there are a couple of significant concerns about emotional intelligence as a concept. For one, EQ has become such a popular idea that there are hundreds of different interpretations and multiple frameworks that treat the subject slightly differently. Emotional intelligence has become somewhat commodified, so different companies offering slightly different evaluations have diluted the impact of each spin-off.

Studies regarding the importance of EQ as an indicator of success have produced mixed results. While some studies indicate emotional intelligence leads to better job performance, others directly refute this idea. There is not enough research to definitively determine how important EQ is to success in a quantifiable manner.

Humans have been fascinated with the idea of measuring intelligence for millennia. IQ tests provide a way to do so and allow the comparison of intelligence between individuals. Essentially, IQ shows how well you can learn, reason and solve problems.

The first IQ test came about during the early 1900s, right after the French government had made it mandatory for all children to attend school. With this new requirement in place, educators needed a way to identify children who would need extra assistance.

Alfred Binet and a colleague, Theodore Simon, designed their questions in areas school didn't focus on. They worked to identify skills like memory, attention and problem-solving. Binet was careful to highlight the test's limitations, pointing out intelligence is a concept too complex to define with a single number. The Binet-Simon Scale gave rise to two other forms of IQ test that are still commonly in use today.

The WAIS-IV creates an index of verbal comprehension, perceptual reasoning, working memory and processing speed. The exam includes 10 sub-tests and five supplemental tests, which provide two scores. The Full-Scale IQ score is a combination of performance on all four of the indexes, and the General Ability Index derives from the scores achieved in the sub-tests.

Attempting to quantify intelligence comes with some significant hurdles. Rolling all the results of a test into a single number and using that to label a person's level of intelligence is simplistic and may provide an inaccurate representation of their cognitive potential. Even the two scores derived from a WAIS-IV test do not provide a comprehensive view of intelligence.

Although IQ tests don't paint a full picture, people tend to put significant stock into their scores. Some individuals may look at their score and inadvertently use it to place limits on their potential. These tests can increased fixed-mindset tendencies in individuals, which is a significant roadblock in improving mental health.

Emotional intelligence is a strong predictor of good mental health. Because emotions are such a central factor in mental health, getting a better handle on them translates directly into healthier behaviors. Here are five ways EQ can help individuals become healthier mentally. 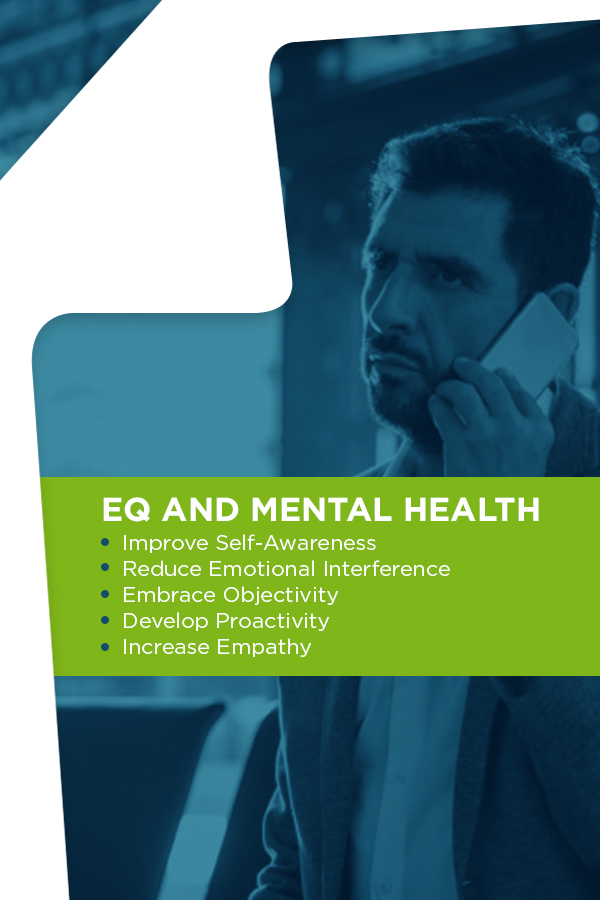 Self-awareness is a critical component in improving mental health and building effective coping skills. Every person has triggers that can cause distress, but not everyone knows how to recognize when someone else is pushing their buttons. A rise in emotional intelligence allows people to recognize when their emotions are beginning to shift in a negative direction.

Emotional stability is one of the essential hallmarks of mental health, and emotional intelligence helps promote it. When the brain receives stimuli from a situation or event, we feed information through an emotional lens before we can even begin to think logically. When emotions are out of balance or particularly strong, they can overpower logical faculties. This phenomenon is known as emotional interference.

Maintaining mental health requires a certain level of objectivity. Mental illness often manifests as self-centered behavior and a worldview that skews toward the self. That can lead people to take things personally and blow events out of proportion. It's impossible to attain true objectivity, but emotional intelligence helps people better understand their role in events.

For example, if someone is dealing with a challenging project at work and receives some negative feedback, it's easy for them to take the criticism as a judgment of themselves as a person. Emotional intelligence could help that person understand that feedback is merely a means of improving the project's quality rather than a personal judgment.

Reactivity is a symptom of many mental disorders and generally makes life miserable. When an individual approaches life from a reactionary standpoint, they hardly ever experience peace of mind because they're always waiting for the next thing to go wrong. On the other hand, being proactive allows people to anticipate future needs and make decisions that suit their best interests.

Emotional intelligence helps individuals reduce reactionary behavior by encouraging proactivity rather than rash decisions. When people are in tune with their emotions as well as those of others, it's much easier to work through situations instead of reacting to them.

Being able to communicate empathetically does a lot to maintain mental health. Relationships are integral to staying emotionally and cognitively healthy, but they can be very stressful to navigate without emotional intelligence. When someone misses physical and language cues that indicate another individual's emotional state, it becomes more challenging to navigate a conversation and get one's point across.

From a business standpoint, investing in EQ development makes good financial sense. In a study of L'Oreal sales agents, the ones who were hired based on emotional competence sold over $91,000 more than their peers. It's a commonly referenced fact that people do business with those they like, and developing empathy via emotional intelligence helps that happen.

On a personal scale, a lack of empathy makes connecting with others nearly impossible — leading to isolation that can cause lasting damage to a person's mental health. Those with high emotional intelligence can communicate more effectively in a variety of social situations, leading to higher self-esteem and social satisfaction.

It's vital to note high EQ does not necessarily translate into true empathy. People with psychopathic tendencies can still display remarkable emotional intelligence, and may use it for manipulative purposes. This phenomenon is quite rare, but can complicate treatment in some cases.

EQ vs. IQ: Which is More Important?

There's no doubt both emotional intelligence and IQ have an impact on a person's ability to achieve success and fulfill their potential. Is emotional intelligence better than IQ at predicting future success? That's where the controversy comes in. In "Emotional Intelligence," Goleman suggested we can only attribute about 20 percent of success to IQ. Many have taken this to mean the remaining 80 percent of success comes down to EQ, but Goleman himself refuted this claim.

In a 2008 blog post about the subject, Goleman put forth a much more balanced view of the two intelligence types. He suggests that in terms of a longitudinal study, IQ would be a better predictor of the jobs people will be successful at. IQ represents a person's ability to process cognitive complexities and thus helps sort out the people who can do a particular job.

Once someone is in a career, however, emotional intelligence gets its spot in the limelight. EQ governs things like how well a person gets along with their coworkers, handles conflict and displays leadership. Among people with the same or similar IQ, emotional intelligence becomes the primary factor differentiating the successful from the unsuccessful.

Of course, a career is not the only measure of success in life. When it comes to predicting the success of relationships and personal growth, EQ is far more useful than IQ. EQ is also more likely to provide better insights on how children will perform in the highly social environment of school. By evaluating both EQ and IQ, behavioral health professionals can get a much more balanced view of an individual and their potential.
A person's IQ score doesn't change significantly throughout their life. Emotional intelligence, on the other hand, is a learned skill people can develop. Social and emotional learning programs operate on this fundamental concept, and aim to educate children or adults on how to incorporate emotional intelligence into everyday life. Much like a muscle, frequent use of EQ strengthens a person's ability to use it.

For behavioral health professionals, monitoring a patient's emotional intelligence throughout treatment can provide valuable insights into their progression. ICANotes is a behavioral health-specific EHR that offers customizable content you can tailor to each patient, so your notes don't miss a step of their development. To get hands-on experience with how ICANotes can change your documentation experience, register for a free trial.

The Differences Between Psychotherapy Notes and Progress Notes

Ways Mental Illness Is Commonly Misrepresented in the Media

Posted in Tips for Clinicians