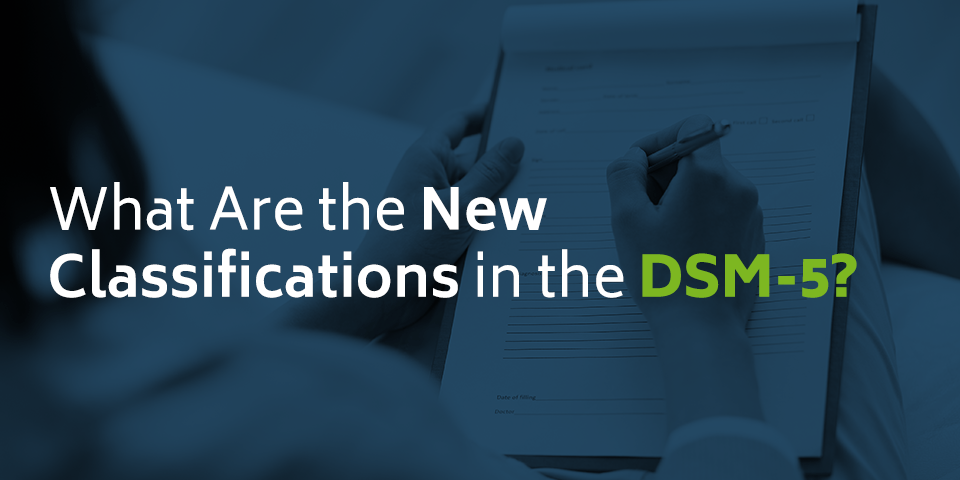 ormation available in the DSM. The most recent DSM is the fifth edition, which introduced a host of changes from the previous version. Understanding the updates is essential to providing correct diagnoses and selecting appropriate treatment in clinical practices.

What Is the DSM?

The Diagnostic and Statistical Manual of Mental Disorders, fifth edition, also known as DSM-5, is the handbook currently used by U.S. behavioral and mental health professionals to make diagnoses. Many people consider the DSM the “Bible” of the mental health field, providing descriptions and classifications of mental disorders, including their symptoms and other criteria required for diagnosis. The DSM gives clinicians a common language to use when communicating information about patients, and researchers a shared basis to study disorders and recommend potential revisions. The DSM has been instrumental in driving advanced research on every aspect of mental and behavioral health. The first DSM came out in 1952 and has undergone several revisions as researchers’ knowledge of mental disorders has evolved. DSM-5 arrived in 2013, bringing multiple updates to mental illness classification that have, in some cases, stirred controversy in the field. The revision process that created DSM-5 lasted nearly a decade and involved nearly 400 scientists and more than 160 renowned clinicians and researchers from around the world. The American Psychiatric Association approved all proposed changes, and a Scientific Review Committee reviewed the strength of the evidence of each modification with a template of validators.

What Have Been the Major Changes of DSM-5?

Broadly, the DSM’s overhaul entails five overarching changes meant to make diagnostics easier and more accurate for clinicians. These changes for mental and behavioral disorders include the following.

In addition to the diagnoses added to DSM-5, several mental disorders in the fifth edition have new criteria, including:

The DSM and the World Health Organization’s International Classification of Disease are companion publications. The DSM contains diagnostic criteria, while the ICD codes monitor mortality and morbidity statistics and are necessary for insurance reimbursement. There are no DSM codes. Instead, the numbers you will find next to diagnoses in the manual are ICD codes. The manual contains ICD-9 codes in bold and new ICD-10 codes in parentheses. Many codes stayed the same between ICDs, but it is vital to note any changes between ICD codes, as clinicians switched to using ICD-10 in 2015. Several disorders have recently received coding updates. The following disorders or conditions initially had no ICD-10-CM codes in DSM-5. They have now had recommended codes since October 2020.

Strengths and Weaknesses of DSM-5

There is always some disagreement between professionals on the best diagnostic and treatment approaches, and continuing research brings more information that drives revisions to the DSM. Some clinicians have enthusiastically greeted many new classifications in DSM-5, while others insist the same changes are detrimental. Some of the most significant controversies and problems with DSM-5 include the following.

The previous DSM had a bereavement exclusion for major depressive disorder. Using DSM-IV, clinicians could not diagnose people who had recently experienced a loved one’s death with depression unless:

DSM-5 has replaced the bereavement exclusion with a note that provides further guidance on how to tell grief apart from major depression. There is now another guide for recording reactions to a loved one’s death, found in the chapter “Other Conditions That May Be a Focus of Clinical Attention.” Clinicians who oppose eliminating the bereavement exclusion are concerned that removing it will lead to people with normal grief receiving an inappropriate depression diagnosis.

Oppositional defiant disorder was highly controversial when added to DSM-IV, and the outcry has continued, as it remains a diagnosis in DSM-5. The condition has these characteristics:

The DSM-5 stipulates that these behavioral patterns must last for six months or more and not result from a different mental health issue. The controversy here is that the relatively lax criteria may lead to over-diagnosis of what may only be bad behavior. It can be severely damaging to label a child or teen “mentally ill” when they may not be.

While the DSM’s creators intended it to function as a common language for researchers to use, it seems the manual has not accomplished part of its mission. According to many experts, DSM-5 does not provide a strong foundation for studying mental illnesses. The National Institute of Mental Health has rejected DSM-5 for research purposes and has shifted its funding away from DSM categories to more neuroscience-based sources. However, this announcement was not a rejection of the DSM outright. Instead, NIMH clarified that while the DSM may no longer be sufficient for researchers, it remains the gold standard for clinical diagnosis.

Developments for the Next DSM

One of the most substantial changes for the next DSM is the shift in revision processes. The APA recognizes the need to make more timely updates to the DSM in response to breakthroughs in research. The change from the Roman numerals used through DSM-IV to the Arabic numerals in DSM-5 reflects the intention to publish incremental updates. We may soon be seeing a DSM-5.1, DSM-5.2 and more until enough cumulative updates necessitate a whole new edition. 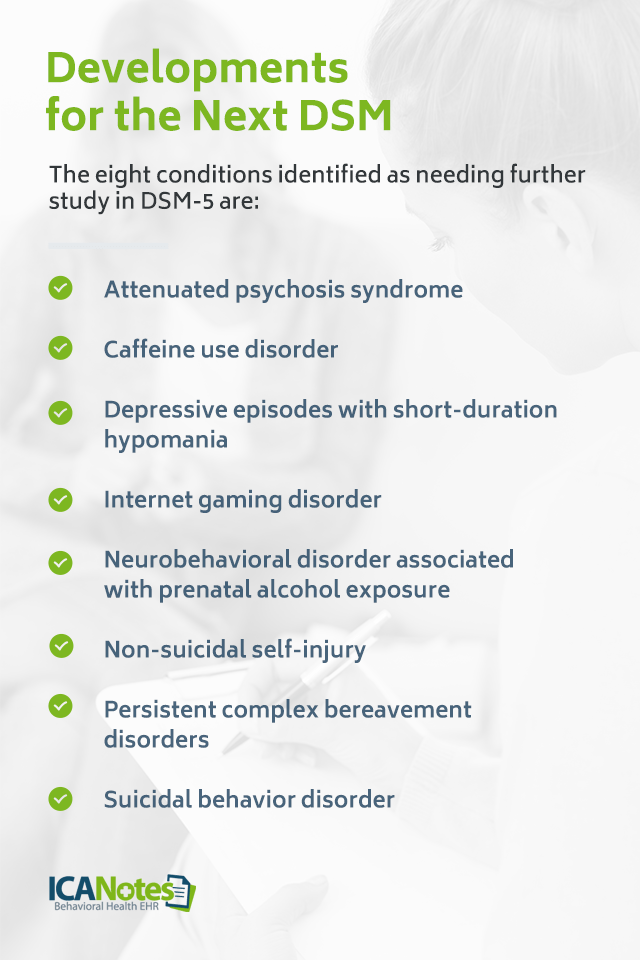 The eight conditions identified as needing further study in DSM-5 are:

Though these conditions do not have formal diagnoses in DSM-5, they will be the first up for consideration in updates to mental illness classification. The information on them is in the DSM to give clinicians more details that may influence the diagnosis of other conditions. For example, someone addicted to caffeine can only receive a diagnosis of a substance-related and addictive disorder, but the diagnosing clinician can gain more insight into the situation by reading the caffeine use disorder section.

One of the formally proposed DSM-5 updates regards the diagnostic features section of intellectual developmental disorder. At present, the criteria for diagnosing an intellectual disability are:

DSM-5 requires that the intellectual impairments must directly relate to the deficiency in adaptive functioning. However, the APA has recommended replacing this with a criterion that specifies a lack of adaptive functioning is due to intellectual deficits. One example given by the American Association on Intellectual and Developmental Disabilities is the case of the state of Texas seeking to execute a man with an intellectual disability. According to the state, the man’s adaptive functions likely resulted from a lack of learning opportunities and were unrelated to his intellectual function. Therefore, he did not have any intellectual disability. In 2016, the Supreme Court ruled against the state, found that the man does have an intellectual disability, then disallowed his execution. The CEO of AAIDD, Margaret Nygren, says that experts agree it is inaccurate to connect or conflate intellect and adaptive behavior because it is impossible to determine which elements of behavior result from mental health issues, IQ or a lack of educational opportunities. The use of the current DSM-5 language in Moore v. Texas is a clear indicator that the DSM is not perfect and needs updates in this area.

ICANotes: Your Source for DSM Information

Understanding the latest DSM classifications is crucial to providing accurate diagnoses and the most appropriate course of treatment for your patients. The most recently updated ICD codes, ICD 11, became available in June 2018, and clinicians will also need to become familiar with those since they will be a reporting requirement starting in 2022. Keeping up with crucial information on the DSM and ICD codes can be time-consuming and confusing, which is why ICANotes works hard to provide up-to-date resources and information for mental and behavioral health clinicians. For additional information on DSM-5 updates and ICD changes, contact ICANotes today. 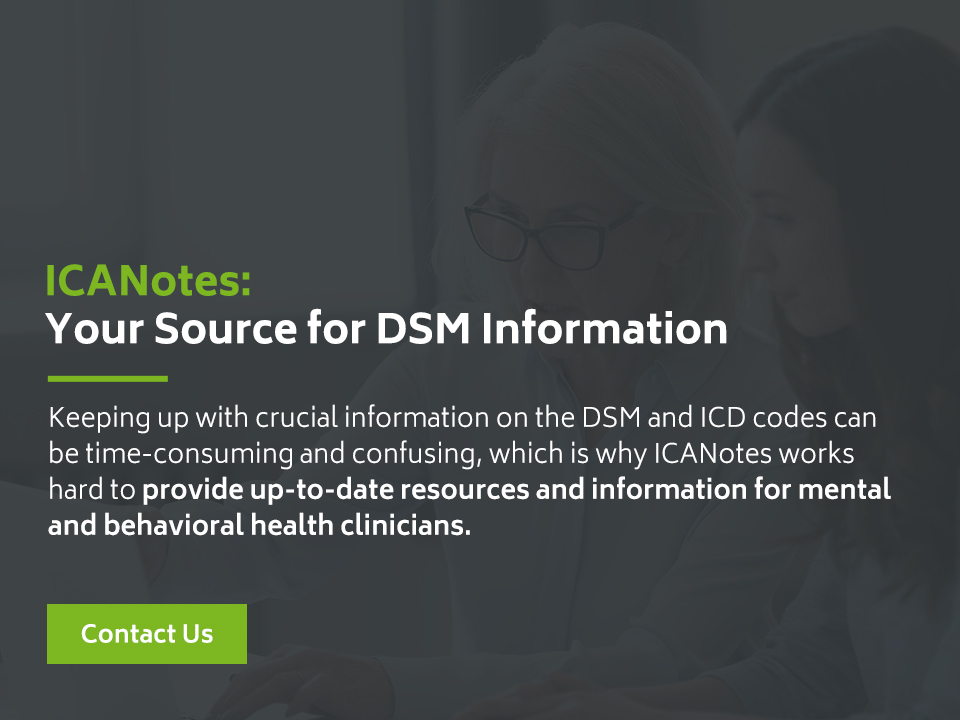 Mental & Behavioral Healthcare Billing: How to Maximize Your Reimbursement Rate

CPT Code Basics: What You Should Know

What Is Evidence-Based Health Care?

What You Need to Know About MIPS in 2019