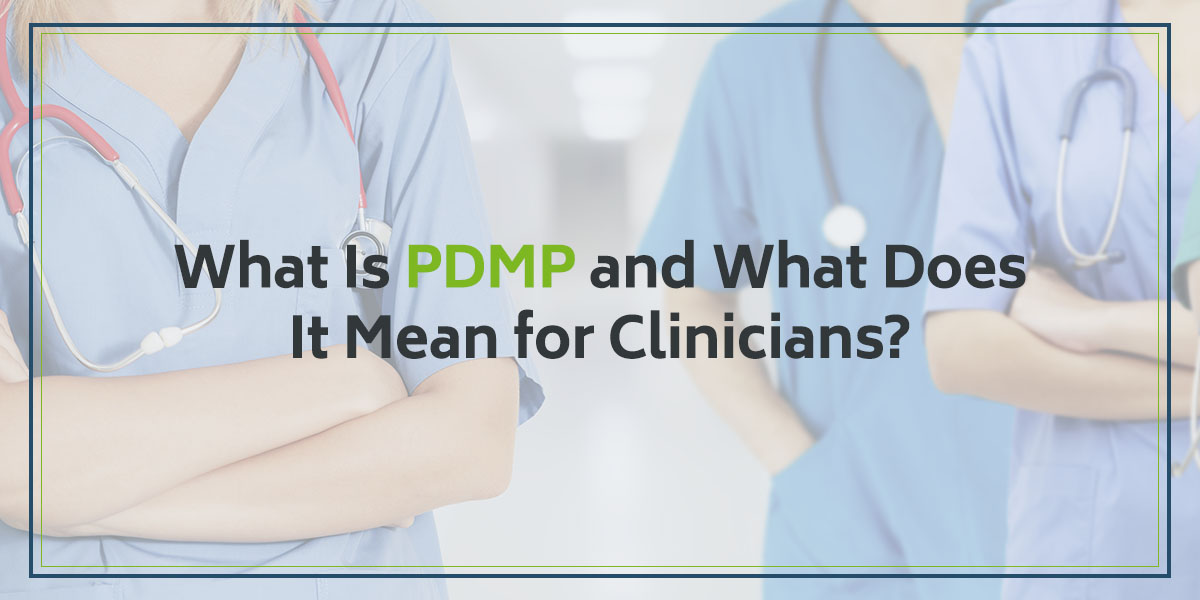 What is PDMP? Is it the same program across all 50 states? What does it mean for me as a clinician?

These are all fair questions, and whether you’re a licensed prescriber or dispenser of any controlled substance, you need to be well informed with answers and up-to-date information pertaining to your professional practice.

Read on to learn more about PDMPs, their history and their implications for healthcare clinicians — including behavioral health professionals who are licensed to prescribe or administer controlled substances.

What Does PDMP Stand For?

What Is the Prescription Drug Monitoring Program?

PDMPs typically operate on a statewide level and act as electronic databases to collect and track data related to the prescribing and dispensing of controlled substances.

The information on any given PDMP is stored in a highly secure fashion and can only be accessed by a limited amount of interested parties — such as licensed prescribers. PDMPs do not form a cohesive nationwide program, but typically a statewide PDMP allows a prescriber to check on the controlled substances that a patient is currently taking.

It should be clear that PDMPs are highly useful tools for dispensers and prescribers to recognize the potential abuse of opioids by their patients.

The History of PDMPs

Back in 1918, prescription reporting was required throughout the state of New York, where doctors had to report codeine, heroin, cocaine, morphine and opium prescriptions. Pharmacists had one day to report their prescriptions for those drugs to the health department.

Other states slowly came on board with the idea over the rest of the century and into the next. But it would take almost two decades after New York’s use of PDMPs for the next one to be implemented in California in 1939, introducing a paper era that would last for 50 years.

Oklahoma was the first state to require electronic communication for its PDMP in 1989. The 2000s saw the greatest growth, with 70% of PDMPs occurring between 2000 and 2015, mostly due to the Harold Rogers Prescription Drug Monitoring Grant from 2003. This grant offered federal funding to states for implementing and improving PDMPs.

Just as New York’s PDMP started with some of the most restricted drugs, many PDMPs only began by tracking Schedule II drugs. At first, PDMPs were more of a public safety invention, used to help law enforcement track the overprescription or movement of drugs illegally. They were focused on addressing doctor-shopping rings and pharmacies or prescribers that would sell prescriptions or controlled substances. Later in the 20th century, prescription opioids and other prescriptions slowly became less of a public safety problem and more of a public health problem.

Fortunately, coverage has expanded since then to include more classes of drugs. PDMPs have also turned to electronic reporting and tools, such as the one from the National Association of Boards of Pharmacy, that facilitate standardized data sharing, particularly across state borders. Some states are incorporating PDMPs within the electronic health record (EHR) systems that many physicians already use.

PDMPs still play a role in preventing criminal issues, but they’re also an exceptional tool that can save lives through addiction treatment and recovery. Most of the PDMPs in the country are run by health organizations, like state health departments and boards of pharmacy, rather than state law enforcement agencies or the Drug Enforcement Administration (DEA).

How Do PDMPs Differ for Various States?

Currently, 49 states — as well as the District of Columbia and the territory of Guam — have a functioning PDMP. Only Missouri doesn’t have a statewide PDMP. However, in early 2021, the state’s legislature approved a statewide PDMP bill.

However, each state’s PDMP operates in its own unique fashion. This means everything from the classes of prescription drugs that must be considered to when doctors must check their PDMP differs from state to state. For example, Pennsylvania requires that all licensed prescribers register with their PDMP and report on all Schedule II through Schedule V controlled substances, while up until recently, Nebraska’s PDMP was voluntary and only recorded data from emergency room visits.

What Does PDMP Mean for Clinicians?

Ultimately, the effective use of PDMPs helps prescribers and pharmacists make evidence-based decisions regarding the use — and possible abuse — of controlled substances by their patients. Information accessed via a PDMP can greatly influence clinicians’ decisions — including choosing whether or not to discontinue a prescription or improve the coordination of health care a patient is receiving.

While workflow challenges are real, the benefits of improved patient data and better lines of communication across multiple healthcare providers mean clinicians can provide better care while simultaneously reducing instances of substance abuse and overdoses.

As we’ve seen, the challenges posed by PDMPs to the average clinician’s workflow are real. However, this is yet another instance when ICANotes can be of great assistance to today’s healthcare professionals.

Current statistics show that it takes an average of more than four and a half minutes to check on a patient’s prescriptions via a PDMP. With ICANotes offering PDMP integration via DrFirst EPCS Gold, that time is reduced to one and a half minutes. That’s a 67% time savings for providers who are already burdened with packed schedules.

To be compliant with your state’s PDMP regulations while making the most of your workday, there’s only one solution. Contact ICANotes now for informed answers to all your EHR questions. If you prefer, sign up for your free trial or live demo today.

SUPPORT Act for Opioid Recovery: Effects on Healthcare and Clinicians